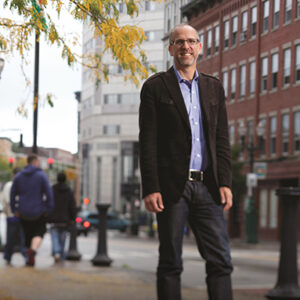 Providing development projects in foreign countries does not always go as planned.

Robert Krueger, professor of human geography at Worcester Polytechnic Institute, determines what changes should be made for future endeavors.

Robert Krueger is a human geographer whose scholarship and teaching focus on epistemic and institutional in community sustainable development projects in the global north and south. At WPI for 20 years, Krueger spent the first half of his career working on community-based research projects in environmental justice neighborhoods in Worcester, Massachusetts. In 2018, created the Development Design Lab (DDL) to support his work on economic, gender, environmental, and education concerns in Ghana and West Africa. Most recently, with his partners, Krueger became PI on US AID/BHA award that supports WASH, gender and youth empowerment, and community business development.

Overcoming the Hubris Problem in Engineering for Development Projects

Starting in the early 1950s, the US shared its scientific and technological expertise globally—often with low- and middle-income countries who were feared to be “at risk” of being persuaded into the fold of Soviet Communism. These projects involved technical support from US experts and transfers of US technology. These interventions to “develop” the “third world” were often deployed without consideration for culture or context and, as such, produced few improvements for those they were intended to help.

A generation later, academics, policy makers, and practitioners acknowledged the problems inherent to “universal” development approaches. Most recently, efforts have been underway to change course and advanced new goals that promote self-sufficiency, peer-to-peer co-creation, and sustainability.

Despite these efforts, engineering disciplines and engineers have often continued to demonstrate the hubris of the previous generation by insisting that they remain the experts and that technology transfer is an unproblematic process.

To meet the ‘hubris problem’ head-on, WPI has created a space for transdisciplinary scholarship and action through its newly launched Institute of Science and Technology for Development or InSTeD. InSTeD’s acronym is intentional as we bring together scholars, community partners, practitioners, entrepreneurs, and students from around the world to solve global problems through cross-cutting research and outreach—community by community.

With our partners we are reframing the concepts of ‘smart villages’, e-waste, and, indeed, innovation, so that they serve the tripartite goals of self-sufficiency, self-determination, and sustainability. In our engagements, we celebrate different forms of knowledge, see concepts of science, technology, and innovation as different ‘traditions of inquiry’ and value creation.

InSTeD and its partners aim to replace hubris with humility as we cultivate a cadre of problem solvers and innovators, and, therefore, reframe the goals of engineering in development.