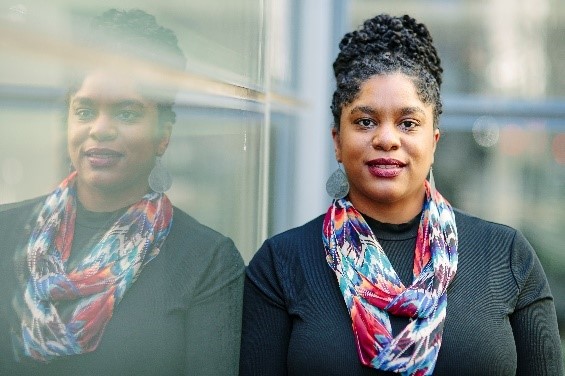 On Drexel University Week: Racism has many effects on those who suffer from its consequences.

Sharrelle Barber, assistant professor of epidemiology, discusses a new approach to fighting it.

Dr. Sharrelle Barber is a social epidemiologist and scholar-activist whose empirical research focuses on the intersection of “place, race, and health” and examines the role of structural racism in shaping racial health inequities among Blacks in the United States and Brazil. Dr. Barber is the Inaugural Director of The Ubuntu Center on Racism, Global Movements & Population Health Equity and a faculty member in the Department of Epidemiology and Biostatistics at the Drexel University Dornsife School of Public Health. Dr. Barber has lectured and taught nationally and internationally about the impact of racism on health inequities and serves on the Group for Racial Equality (GRacE) International Advisory Board for the Lancet. Deeply rooted in the rich legacy of “Black Women Radicals” from the South, the legacy of activism of her beloved alma mater, Bennett College, and experiences that have taken her to cities across the United States and Brazil, Dr. Barber seeks to use empirical research and scholarship to make the invisible visible and mobilize data for action.

Racism—in all its forms—has deadly consequences leading to the truncated lives of Black people in the United States and around the world. The epidemiologic data is clear. During the COVID-19 pandemic Black people in the United States and other racialized societies like Brazil have died at higher rates and younger ages than white people. Life expectancy in the United States has fallen for all racial groups, but has been most striking for Black Men who lost 3 years of life between 2019 and 2020. In cities across the country, life expectancy differences are upwards of 20 years in racially segregated Black communities compared to more affluent white communities, a direct result of decades of economic disinvestment and exclusion, targeted state-sanctioned violence, and suppression of political power. My empirical research as a social epidemiologist has documented the harmful impacts of segregation on the health of Black communities from Jackson, Mississippi to Rio de Janeiro, Brazil. The data is sobering. The loss of life is painful. But these same communities hold both power and possibility.

I am excited to be leading a powerful group of scholars and activists at the newly launched Ubuntu Center on Racism, Global Movements & Population Health Equity. Ubuntu— A South African principle that means I am because we are— embodies our human-centered approach to antiracism in scholarship and action to advance population health equity. We are committed to: advancing transdisciplinary, anti-racism population health scholarship; bridging relationships to build critical consciousness and power for health equity and racial justice; and expanding collective action for population health aligned with the principles of community organizing and social movements locally and globally. We envision a just future, free of systems of oppression, full of new possibilities through bold, collective action, and an equitable world in which all individuals and communities are healthy and thriving.