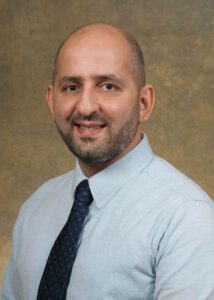 Non-victims can be affected harshly by mass shootings.

Arash Javanbakht, associate professor in the department of psychiatry and behavioral neurosciences at the Wayne State University School of Medicine, determines that even those not hit can become afflicted.

Arash Javanbakht, M.D., is a psychiatrist and serves as the director of the Stress, Trauma, and Anxiety Research Clinic (STARC). His work is focused on anxiety, trauma, and PTSD. He often helps civilians, refugees, and first responders with PTSD.

Several research studies at the STARC examine the impact of exposure to war trauma in adults and children Syrian and Iraqi refugees, and biological and psychological factors of risk and resilience. This research examines genetic and inflammation correlates of trauma as well. This work is funded by an NICHD R01 award. Also, use of art, dance and movement, and yoga and mindfulness in helping refugee families overcome stress.

STARC also works neurobiology of psychotherapy, and on utilization of augmented reality and telemedicine to develop a method of providing in vivo treatment for anxiety disorders and PTSD.

Effects of Mass Shootings on Non-Victims

Mass shootings affect a wide range of people, including witnesses, first responders, and those exposed to the news.

The immediate survivors may experience a range of problems from survivor’s guilt to full blown posttraumatic stress disorder with anxiety, avoiding reminders of trauma, emotional numbness, hypervigilance, intrusive trauma memories, nightmares and flashbacks. Full-blown PTSD affects up to one third of the survivors. Debilitating depression occurs in up to 80% of people with PTSD. PTSD can improve by itself, but many need treatment. Effective treatments include psychotherapy and medications. In children, exposure to such horrific experiences or related news can fundamentally affect the way they perceive the world as a safe place, and how much they can rely on the adults and society to protect them. They can carry this worldview for the rest of their lives, and transfer it to their own children.

PTSD can also develop via exposure to others’ trauma. People exposed to mass shootings may see dead bodies, injured people in agony, hear extremely loud noises and experience chaos and terror. While victims try to run away from an active shooter, the police, firefighters and paramedics rush into the danger zone. First responders face threats to themselves and others; and terrible bloody post-shooting scenes, too frequently. PTSD is reported in up to 20% of first responders to mass violence.

Exposure to the news may also cause distress and anxiety. Every time there is a mass shooting in a new place, people learn that kind of place is now on the not-very-safe list.

Read More:
starclab.org
[The Conversation] – Mass shootings leave emotional and mental scars on survivors, first responders and millions of others