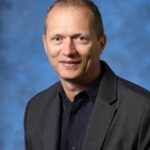 Your body may have its own way to fight tumors; we just need to trigger it.

Peter Kaiser, professor and chair of biological chemistry at the University of California, Irvine, explores a new therapy to do so.

Peter Kaiser, PhD, is the chair of the Department of Biological Chemistry at the UC Irvine School of Medicine and member of the Chao Family Comprehensive Cancer Center. Dr. Kaiser’s research interests include cell cycle control, regulation of proteins by ubiquitylation, reactivation of p53 in cancer, and cancer drug target discovery.

Therapies That Restore the Body’s Own Tumor Suppressing Activity

As a cancer researcher, sometimes the greatest discoveries can come from the places you least expect them to. In a recent study I co-led, we used a new computation-guided approach to identify small molecules that can restore aspects of the natural anti-tumor function to mutated p53.

For context, the tumor suppressor p53 is one of the most powerful mechanisms organisms use to protect themselves from cancer. Humans only have two copies of this gene and it is the most mutated gene in human cancer. However, we’re seeing that animals with multiple copies of the p53 gene, like Elephants, rarely get cancer in the first place. Elephants can tolerate mutations in p53 because they have several intact copies. Restoring the anti-tumor activity of mutated p53 should be a powerful strategy for cancer therapy.

This is why our groups decided to focus on restoring the p53 tumor suppressor function. We used an ensemble-based virtual screening approach, to identify drug-like compounds that can reactivated mutated inactive p53. The small drug-like compounds we identified have selective anti-cancer activities on tumors with p53 mutations in pre-clinical animal models.

Expansion of this strategy can increase chemical diversity of p53 corrector molecules for clinical development.

This study successfully demonstrates the feasibility and efficacy of pharmaceutical reactivation of mutant p53, which characterizes almost 50% of tumors detected in humans. These findings are encouraging given the large number of cancer patients with p53 mutations that could benefit from such drugs.

With this research, we are one step closer to providing cancer patients with the effective drugs they need.

The post Peter Kaiser, University of California, Irvine – Therapies That Restore the Body’s Own Tumor Suppressing Activity appeared first on The Academic Minute.