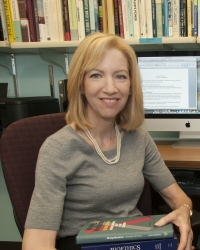 Ethics can be an important part of emerging technology.

Nancy Jecker, professor in the department of bioethics and humanities at the University of Washington School of Medicine, discusses one instance where it’s vital to be careful.

My research explores bioethics, moral philosophy, and global ethics. It spans a range of topics, including robots and AI ethics; human dignity; global bioethics; and individual and population aging.

The Ethics of Brain Computer Interfacing

Brain-computer interface (BCI) is an emerging technology that connects people’s brains directly with a computer. Basically, a person thinks about what they want to do, their brain signals are picked up by the BCI device and decoded, and the device transmits an instruction to an output device to carry out the desired action. For example, someone immobilized by paralysis thinks about moving a glass to drink; the computer decodes their brain signals and tells a robotic arm to raise a glass.

As we extend BCI beyond medicine to healthy people, it carries potential risks, like brain hacking, information theft, and behavior control. Responsible BCI use requires ethics.

Utilitarianism is an ethical approach that tells us to maximize well-being for everyone affected. A second approach holds that people have certain rights when it comes to their brains, neurorights, that must be protected even if doing so does not create the greatest good. I have defended supplementing neurorights with a capability view. It holds that respecting human dignity requires protecting a much broader range of capabilities than neurorights: the ability to be physically and mentally healthy; relate to others; feel a range of human emotions; exercise senses, imagination and thought, and regular our immediate environment.

With BCI and other neurotechnologies, we are on a trajectory that creates exciting possibilities while posing new risks. It’s imperative to think through BCI ethics.

The post Nancy Jecker, University of Washington School of Medicine – The Ethics of Brain Computer Interfacing appeared first on The Academic Minute.