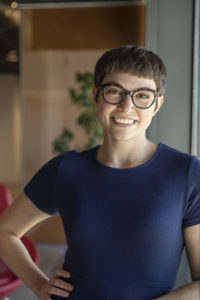 The trucking industry is modernizing rapidly, but is it for the better?

Karen Levy, associate professor in the department of information science at Cornell University, has more.

Karen Levy is an associate professor of Information Science at Cornell University and associated faculty at Cornell Law School. Her new book, Data Driven: Truckers, Technology, and the New Workplace Surveillance, offers a behind-the-scenes look at how surveillance and automation are affecting the trucking way of life.

How Surveillance is Changing the Long-Haul Trucking Industry

Long-haul truck drivers are the backbone of the American economy. Nearly everything you own was, at one point or another, on a truck being hauled by a truck driver down a highway. And the supply chain disruptions of the pandemic have only made clearer how essential truck drivers are.

But what it means to be a truck driver has started to change. Many truckers will tell you that what attracts them to the job is autonomy and freedom. But recently, surveillance technologies have proliferated in the industry, and truck drivers now find themselves under the gaze of many eyes. I’ve been studying these transitions in the industry over the last several years, and in my research, I discuss how trucking is changing in the face of data-driven technologies.

Since 2017, the federal government has required digital monitoring of all American long-haul truck drivers as part of their compliance with timekeeping regulations. Under the law, all truckers must install and use electronic logging devices, or ELDs, which keep track of where they are and how much they’re driving.

But ELDs aren’t only a technology that facilitates government oversight of truckers. The devices also scaffold a much broader range of monitoring capability from trucking firms over their workers — a phenomenon I call surveillance interoperability. So since they already have to buy ELDs, companies also use them to keep track of things like how much fuel a trucker is using, or how hard he’s braking. Some even monitor a driver’s eyelids using AI-augmented cameras to determine if he’s paying enough attention to the road. On top of this, third-party companies like insurers are very interested in buying data on how truckers are doing their jobs. The one person who’s not benefiting is the trucker, whose job has become less flexible, as the freedom of the open road begins to appear much less open.

The post Karen Levy, Cornell University – How Surveillance is Changing the Long-Haul Trucking Industry appeared first on The Academic Minute.