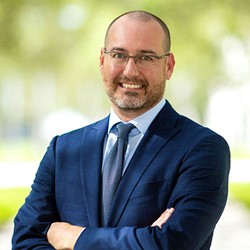 Your risk for Alzheimer’s goes beyond genetics.

Jason Richardson, professor and associate dean for research in the Robert Stempel college of public health and social work at Florida International University, discusses another area of concern.

Dr. Jason Richardson is Professor and Associate Dean for Research in the Robert Stempel College of Public Health and Social Work at Florida International University. He is a Diplomat of the American Board of Toxicology (DABT) and a Fellow of the Academy of Toxicological Sciences (ATS). Dr. Richardson received his M.S. and Ph.D. degrees from Mississippi State University and completed postdoctoral training in at Emory University. He received the Outstanding New Environmental Scientist Award from NIEHS and was the inaugural recipient of the Young Investigator Award from the Toxicology Division of ASPET. Dr. Richardson’s research focuses on the role of environmental exposures and their interactions with genetic susceptibility as contributors to neurological disease using translational approaches

Our team of researchers discovered how an environmental exposure contributes to Alzheimer’s disease risk.

DDT is a pesticide that was heavily used for mosquito control from the 1940’s until it was banned in 1972. Now we know DDT remains in the environment decades later and even worse….in the bloodstream of millions of Americans. In fact, more than 90 percent of people in the United States have detectable levels of DDT or its metabolite DDE.

Our study found that exposure to the pollutant causes increased amounts of toxic amyloid beta, which form the characteristic amyloid plaques found in the brains of those with Alzheimer’s disease.

The study focused on sodium channels, which the nervous system uses to communicate between neurons, as the potential mechanism. DDT causes these channels to remain open, leading to increased firing of neurons and increased release of amyloid-beta peptides.

We found that by treating neurons with tetrodotoxin, a compound that blocks sodium channels in the brain, we can prevent the increased production of the amyloid precursor protein and toxic amyloid-beta species.

For years, the focus of research has been on the genetic factors of Alzheimer’s. This finding tells us we must focus on environmental factors as well.

Understanding how these interact will hopefully one day help us identify people who are at risk much earlier in their lives, as well as help to develop better treatments we can use to stave off this devastating disease.