Chris Impey, University of Arizona – Super-Earths and the Search for Life Beyond Earth 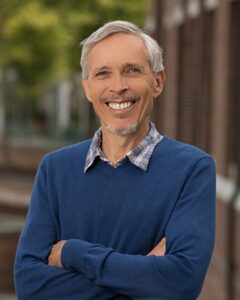 We’re still waiting to see signs of life among the cosmos.

Chris Impey, university distinguished professor in the department of astronomy at the University of Arizona, explores the skies for clues.

Chris Impey is a University Distinguished Professor of Astronomy at the University of Arizona. He has over 230 refereed publications on observational cosmology, galaxies, and quasars, and his research has been supported by $20 million in NASA and NSF grants. He has won eleven teaching awards and has taught three online classes with over 350,000 enrolled and 6 million minutes of video lectures watched. Chris Impey is a past Vice President of the American Astronomical Society, and he has won its career Education Prize. He’s also been NSF Distinguished Teaching Scholar, Carnegie Council’s Arizona Professor of the Year, and a Howard Hughes Medical Institute Professor. He has written 90 popular articles on cosmology, astrobiology and education, two textbooks, a novel called Shadow World, and nine popular science books: The Living Cosmos, How It Ends, Talking About Life, How It Began, Dreams of Other Worlds, Humble Before the Void, Beyond: The Future of Space Travel, Einstein’s Monsters: The Life and Times of Black Holes, and an upcoming book on exoplanets, Worlds Without End.

Super-Earths and the Search for Life Beyond Earth

The search for life beyond Earth is in a new phase as astronomers study the nearest exoplanets that are habitable, so at a distance from their parent star where liquid water can exist. Recent attention focuses on super-Earths, exoplanets several times the size and mass of the Earth.

Super-Earths are likely to be super-habitable. Higher mass guarantees a geologically active planet, and plate tectonics are thought to have been critical in the development of life on Earth. It also means strong gravity, which can hold a thick atmosphere to protect life from cosmic rays and UV radiation.

I’m excited to report there are many of these worlds that are ripe for biology. A third of all exoplanets are super-Earths, 1700 in all, more than any other type of exoplanet, projecting to ten billion across the galaxy. We don’t know much about super-Earths because most are hundreds of light years away, and there’s no super-Earth in our own Solar System.

That’s about to change. The James Webb Space Telescope can use spectroscopy to sniff the atmospheres of super-Earths and see if they contain gases like oxygen and methane that indicate life here on Earth. A future generation of huge, ground-based telescopes that are under construction will do more of this work, and even allow images to be made of super-Earths.

We’re understandably attached to it, but Earth is not the best of all possible worlds. There have been violent variations in climate in the past, including an early hot phase and several times when the planet entered a deep freeze, nearly extinguishing all life. Astronomers will soon be looking for life on super-Earths and if the searches all fail we may be forced to conclude that the universe is a lonely place.

[The Conversation] – Super-Earths are bigger, more common and more habitable than Earth itself – and astronomers are discovering more of the billions they think are out there

The post Chris Impey, University of Arizona – Super-Earths and the Search for Life Beyond Earth appeared first on The Academic Minute.