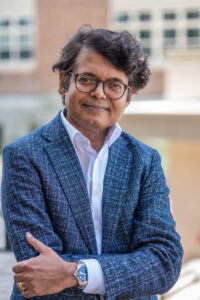 On University of Dayton Week: Learning how to combat virus spread in the future will be key.

Subramanian Ramakrishnan, associate professor of mechanical and aerospace engineering, looks at how to update our models.

Subramanian (Subbu) Ramakrishnan (SOOB-rah-mahn-yan RAHMA-krish-nan) obtained his B.Tech. (Mahatma Gandhi University, Kerala, India), M.Sc. (University of Calgary, Alberta, Canada), MSE (Johns Hopkins University) and Ph.D. (Rutgers University – New Brunswick), all in Mechanical Engineering. Following post-doctoral stints (Univ. of Maryland and Univ. of Cincinnati), he was a research assistant professor in the Center for Nonlinear Dynamics and Control, Villanova University. He joined the University of Minnesota Duluth as an assistant professor in fall 2014 and was promoted to associate professor with tenure in fall 2020. He currently is an associate professor in the department of mechanical and aerospace engineering, University of Dayton. Subbu’s research interests are in the areas of nonlinear, stochastic dynamics and control with applications in areas including robotics, dynamics of nanoelectromechanical systems, energy localization and epidemiological modeling. He is an author or co-author of more than 50 peer-reviewed research publications and his research has been supported by the National Science Foundation and the U.S. Army Research Office. He has advised multiple graduate student theses and mentored several undergraduate research projects. He serves as a proposal review panelist for the NSF and also as an associate editor for the American Society of Mechanical Engineers (ASME) Dynamic Systems and Control Conferences, the ASME/IEEE American Control Conferences, and the International Federation of Automatic Control (IFAC) Modeling, Estimation and Control Conferences. He also serves as a reviewer for multiple journals.

Epidemics spread differently in rural areas than big cities because of differences in population density and behavioral patterns. So a one-size-fits-all regional or national approach to predicting the spread isn’t optimal.

It’s not like constructing a universal model for the laws of gravity, which apply to everything in the universe. The dynamics of epidemics differ by location, so creating models specific to the situation is important for effective prediction.

Models flexible enough to interact with and learn from data in as close to real time as possible will allow local and regional public health officials to appropriately prescribe early interventions like physical distancing and masking.

We looked at transmission data from the state of Ohio and Hamilton County, Ohio, for the month of April 2020, the first full month of the COVID-19 pandemic. Our preliminary models worked well for state data and even better for county data, which reinforces the notion these novel models are probably more effective for smaller geographical regions.

Our team will focus on how uncertainties in human behavior and disease transmission drive an epidemic and the challenges of prediction given the limited reliability of early data. Even in local areas, we want to produce a suite of models capable of predicting best-case to worst-case scenarios in the short-term and the medium-term.

One is typically skeptical about early data. There’s always that inevitable time lag between an infection spreading in real-time and the public health system collecting data. The limitations of existing predictive models as evident during the COVID-19 outbreak in the U.S. underscore the need for new knowledge in this area.