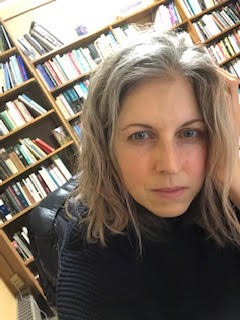 How much bad news can your brain handle at a time?

Rebecca Rozelle-Stone, professor of philosophy and director of the honors program at the University of North Dakota, explores why the news cycle is so tiring.

Rebecca Rozelle-Stone, Ph.D. is Director of the University Honors Program and Professor of Philosophy at the University of North Dakota. She earned her B.A. in philosophy at Birmingham-Southern College and her M.A. and Ph.D. in philosophy, with emphasis in American and Continental philosophy respectively, at Southern Illinois University Carbondale. Rozelle-Stone served as the President (2014-2016) of the American Weil Society and has written books and essays on Simone Weil. Aside from this, her research interests include existential philosophy, feminism, the ethics of attention, and the growing field of fatigue studies.

When Putin invaded Ukraine in February, many of us became aware of the unprovoked aggression in mediated ways–by reading online coverage or watching TV.

Over half a year later, the violence continues. But for those of us who aren’t directly affected by the events, this ongoing war has likely been shifting to the periphery of our attention.

Being attentive to realities like war is painful, and people are not well-equipped to keep a sustained focus on traumatic occurrences. The 24/7 news cycle and our digital devices engineer environments to keep us perpetually distracted and disoriented.

As a result, tragic events can recede from our attention because we feel overwhelmed, helpless or drawn to other urgent issues. This phenomenon is called “crisis fatigue.”

My interest in fatigue stemmed from my research into attention. French philosopher Simone Weil wrote that moral attention is the capacity to open ourselves fully to realities we encounter. Attention is a suspension of our ego-driven frameworks to sense what is actually before us, without avoidance or projection.

The sensitivity involved in attending to crises is a double-edged sword. While attention puts us in touch with the unvarnished lives of others so the afflicted are truly seen and heard, such openness can overwhelm us through vicarious trauma.

How might we recover a capacity for meaningful attention in this context? Limiting the daily intake of news can help us focus on particular issues without feeling overwhelmed. Reading long-form articles can assist in cultivating attention and decreasing the sense of futility that comes with ‘doom-scrolling.’

Journalists can include more solutions-based stories that capture the possibility of change. As author Amanda Ripley notes, “Stories that offer hope, agency, and dignity feel like breaking news right now, because we are so overwhelmed with the opposite.”