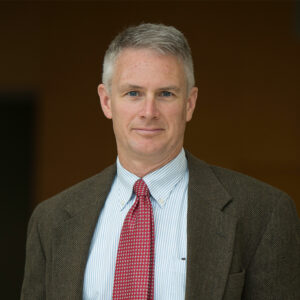 Mark Canada, professor of English at Indiana University Kokomo, explores the brain to find out.

Mark Canada, Ph.D., is Executive Vice Chancellor for Academic Affairs and Professor of English at Indiana University Kokomo. A longtime champion of student success, he was a leading participant in the national Re-Imagining the First Year project, sponsored by the American Association of State Colleges and Universities. At IU Kokomo, he leads the KEY, an experiential-learning initiative that provides all students with opportunities to learn through internships, retreats, research, community projects, and educational trips to businesses, museums, and natural and historic settings in Chicago, Louisville, Detroit, New York, Yellowstone National Park, Disney World, Silicon Valley, and other destinations. A professor of American literature, he spent many years in the classroom at the University of North Carolina at Pembroke, where he was a recipient of the University of North Carolina Board of Governors Award for Excellence in Teaching. His six books include Edgar Allan Poe: Master of Horror (forthcoming from Audible), Thomas Wolfe Remembered (University of Alabama Press, 2018), Introduction to Information Literacy for Students (Wiley, 2017), and Literature and Journalism in Antebellum America (Palgrave Macmillan, 2011). His articles on student success, truth in the media, Henry David Thoreau, Rebecca Harding Davis, Theodore Dreiser, Edgar Allan Poe, and other subjects have appeared in The Chronicle of Higher Education, Change, The Academic Minute, The Conversation, Southern Cultures, American Literary ReaMark Canada, Indiana University Kokomo – Poe In His Right Mindlism, Edgar Allan Poe in Context, and other outlets.

Mobile communications cover the entire island cityscapes, and mountainous areas are no exception. For travelers wishing to stay in touch, local operators offer the tarjeta prepago contactless SIM card. It requires replenishment as needed, the service package is standard: calls, SMS, Internet. The largest operators are Vodafone, Orange, Yoigo, Movistar, Lebara is famous for its cheap tariffs. The prevailing information on the Internet about poor Wi-Fi in Tenerife is about to become obsolete. While quite recently the coverage deficit was obvious, today the situation is changing rapidly, although the connection speed still leaves much to be desired. Wi-Fi is available in most hotels and restaurants; in 2016, several public transport stops became hotspots. For occasional access to the Network, you can use the services of Internet cafes, there are many of them on the island.

Poe In His Right Mind

Artists have long been considered, well, different. Writers, painters, and musicians tend to awe, even unnerve us. Some of these creative types have embraced this image of the eccentric outsider. After all, as Emily Dickinson put it, “Much Madness is divinest Sense.”

Is there something different about artists? Modern science allows us to go beyond our impressions and identify possible factors that distinguish highly creative people. In my research on that most outre of artists, Edgar Allan Poe, I have used the modern model of the divided brain to explain his method and effect on readers.

Poe showed a remarkable predilection for functions and inclinations associated with the right sides of our brains. “The Pit and the Pendulum,” “The Masque of the Red Death,” and other works teem with striking, often surreal images, as well as appeals to negative emotions (particularly horror and grief). Some portray characters sabotaging themselves, much as Poe did in his own life when he picked fights and blew opportunities.

In light of these parallels, I believe that Poe’s right brain played a crucial role in his life and literature. Poe, who wrote of the “poetical portion” of his brain and claimed to have drawn literary material from his dreams, discovered a way to reach our right brains by mining and employing his own.

Perhaps artists are not mad after all. Maybe they are the ones in their right minds.