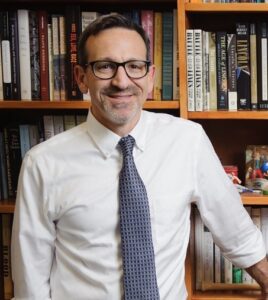 We are still working to understand slavery in American history.

Joshua Rothman, professor of history at the University of Alabama, discusses one often overlooked part of this history.

Joshua D. Rothman is professor of history and chair of the Department of History at the University of Alabama. He is the author of three books about the history of American slavery: Notorious in the Neighborhood: Sex and Families across the Color Line in Virginia, 1787-1861 (2003), Flush Times and Fever Dreams: A Story of Capitalism and Slavery in the Age of Jackson (2012), and, most recently, The Ledger and the Chain: How Domestic Slave Traders Shaped America (2021).

When Americans think of the slave trade, they typically associate it with the transatlantic trade that brought enslaved people to the western hemisphere from Africa rather than with the buying and selling of slaves within the boundaries of the United States. But over twice as many people were trafficked inside the United States as were imported to mainland North America from overseas. Between the early colonial period and the time slavery ended in 1865, more than one million enslaved people were forcibly moved across state lines in this country. Hundreds of thousands more were bought and sold within individual states.

The domestic slave trade was ubiquitous in the slave states in the nineteenth century, spurred by the ravenous demands of the cotton economy, by slaveholders who put themselves in debt, and by the greed of slave traders, merchants, and bankers throughout the country and even in Europe.

That Americans today do not grasp the scale of the domestic trade is ultimately the product of a successful propaganda campaign. Beginning before the Civil War and extending long past its conclusion, white southerners said they abhorred the slave trade and slave traders, or they simply denied how prevalent the slave trade actually was. All of it was part of an effort to make slavery seem benign, and by the twentieth century even many white northerners preferred to think of the antebellum South as a place of moonlight and magnolias rather than of chains and auction blocks.

But until we come to terms with how fundamentally slavery was grounded in the sales of nearly two million people, and how that shaped the lives of the enslaved and the economy of the entire country, we will never really understand the significance of the institution for the American past, or for its present.