Chris Impey, University of Arizona – The Dark Ages of the Universe 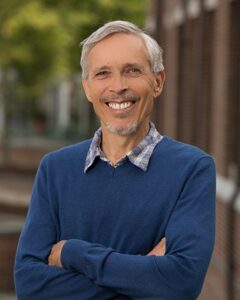 A new telescope could tell us a lot more about the origins of our universe.

Chris Impey, university distinguished professor in the department of astronomy at the University of Arizona, looks into the lens for more.

Chris Impey is a University Distinguished Professor of Astronomy at the University of Arizona. He has 210 refereed publications on observational cosmology, galaxies, and quasars, and his research has been supported by $20 million in NASA and NSF grants. He has won eleven teaching awards and has taught three online classes with over 350,000 enrolled and 5 million minutes of video lectures watched. Chris Impey is a past Vice President of the American Astronomical Society, and he has won its career Education Prize. He’s also been NSF Distinguished Teaching Scholar, Carnegie Council’s Arizona Professor of the Year, and a Howard Hughes Medical Institute Professor. He has written 80 popular articles on cosmology, astrobiology and education, two textbooks, a novel called Shadow World, and nine popular science books: The Living Cosmos, How It Ends, Talking About Life, How It Began, Dreams of Other Worlds, Humble Before the Void, Beyond: The Future of Space Travel, Einstein’s Monsters: The Life and Times of Black Holes, and an upcoming book on exoplanets, Worlds Without End.

The Dark Ages of the Universe

We might soon be able to learn more about the Dark Ages of the Universe. Astronomers have accumulated a lot of evidence that our universe began with an event 14 billion years ago called the big bang. From this initial ultra-hot, ultra-dense origin, the universe has expanded to reach the vast and cold state we see today.

The early universe was a glowing fireball, a high-energy particle “soup” with no structure. As it faded to black, the universe entered a long Dark Ages. But it was not perfectly smooth, and tiny ripples in density were the seeds for the subsequent formation of stars and galaxies. Astronomers call this First Light. We don’t know how long the Dark Ages lasted, but it was probably several hundred million years.

Enter the James Webb Space Telescope. This successor to the Hubble Space Telescope is due for launch in December and it was perfectly designed to nail down the end of the Dark Ages. James Webb is many years behind schedule, billions of dollars over budget, and an extremely complicated piece of hardware, so astronomers await its launch with nervous anticipation. It will collect seven times more light than the Hubble Space Telescope, and its detectors are optimized to detect infrared light, the wavelength range of distant galaxy light after it has been stretched by the expansion of space.

Pinning down the end of the Dark Ages will let astronomers answer several important questions in cosmology. Which formed first, stars or galaxies? Was there an early generation of black holes, and did galaxies nucleate around them? And what was the role of dark matter, a ubiquitous but still enigmatic ingredient of the universe, in the timing of the end of the Dark Ages?

The post Chris Impey, University of Arizona – The Dark Ages of the Universe appeared first on The Academic Minute.