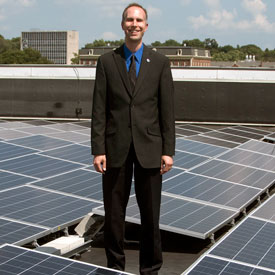 Our current rate of energy use cannot go on forever.

Ben McCall, professor of sustainability at the University of Dayton, looks for solutions.

Ben McCall, a professor of sustainability and executive director at the Hanley Sustainability Institute at the University of Dayton, is a founding member of the Planetary Limits Academic Network to promote the understanding of planetary limits, envision scenarios for humanity to thrive within planetary limits, better educate college students about these challenges, and advise government officials and communities in developing effective responses. Other founding members include Tom Murphy, professor of physics at the University of California at San Diego; David Murphy, associate professor and department chair of environmental studies at St. Lawrence University; Melody LeHew, a professor of interior design and fashion studies at Kansas State University; and Tom Love, professor emeritus of anthropology at Linfield University.

Prior to joining UD, McCall converted his homestead to net-zero energy, using solar photovoltaics, wind turbines, and a European-style masonry heater fueled by sustainably harvested firewood, and spearheaded climate action planning at the University of Illinois at Urbana-Champaign.

Modernity is Incompatible with Planetary Limits

To individual humans, the earth seems inconceivably large, and chock-full of resources. However, earth’s resources are finite, and human demand is beginning to strain the supply.

We call these “Planetary limits” to the scale of the human endeavor, which define the boundaries on our planet’s ability to provide resources.

I am part of a research team who founded the planetary limits academic network.

We recently published an analysis of the impact of limits on human systems, finding that at humanity’s current rate of energy growth, the earth’s surface would reach the boiling point of water in 400 years — a clear example of exceeding those planetary limits.

While we often think of climate change and resource depletion as technological problems, these are merely symptoms of a larger predicament — our ever-increasing use of energy and other resources driven by our expectations for growth, and the expectations of our economic system.

But even the founders of economics recognized that earth’s resources are finite and that growth is but a transient phase.

Think of it this way, early flying machines invariably crashed despite an exhilarating brief flight because they were simply not built according to the principles of sustainable flight.

Likewise, our economic system is not built on principles for sustainable operation.

We all are a product of our times where new, shiny, better and more, more more seem normal, but that’s only a reflection of the abnormal period of the last century or so, as we spend down our earthly inheritance.

Only by budgeting to live within planetary limits can human society enjoy a long and fulfilling future.

We really cannot expect a jetson’s-like future of flying cars. But through intentional planning, we can hope to do better than a future that looks more like the Flintstones.

The post Ben McCall, University of Dayton – Modernity is Incompatible with Planetary Limits appeared first on The Academic Minute.