The gap between the number of black and white students graduating from four-year institutions has widened, says a recent report by the Education Trust, “A Look at Black Student Success: Identifying Top- and Bottom-Performing Institutions.” The report examines data from the Integrated Postsecondary Education Data System’s Graduation Rate Survey by the National Center for Education Statistics. Most of the report focuses on graduation and enrollment rates at 676 four-year institutions, not including Historically Black Colleges and Universities (HBCUs) and for-profit institutions, which are examined in separate sections.

While the gap between black and white students is widening nationwide, it was “refreshing to find” that several institutions had little or no gap, said Andrew Nichols, director of higher education research and data analytics at the Education Trust and one of the report’s coauthors. “I think it’s important for administrators, particularly presidents and provosts, to understand that completion gaps that separate black students and white students can be closed.”

Though the Education Trust has studied black student success for several years, the report included unique findings about HBCUs. HBCUs serve “a very different demographic that is much more socioeconomically disadvantaged than any other type of institution—public, nonprofit, and private,” Nichols said. When comparing HBCUs with other institutions that serve similar demographics, “you actually see HBCUs have higher completion rates for their black students.”

Nichols acknowledged that closing graduation gaps is difficult for any institution. “Oftentimes people will ask the question, ‘Well what exactly should I do to improve outcomes on our campus or close gaps on our campus?’ And our answer is, ‘There is no specific recipe.’ Generally, we know what works, but what administrators should do on each campus may vary depending on the specific challenges students are facing.”

The report suggests that administrators study the strategies adopted by top-performing institutions, “set clear improvement goals, mine their data to help identify problems and refine practices, and optimize the use of whatever resources they have.”

The Success and Access Gap Between Black and White Students 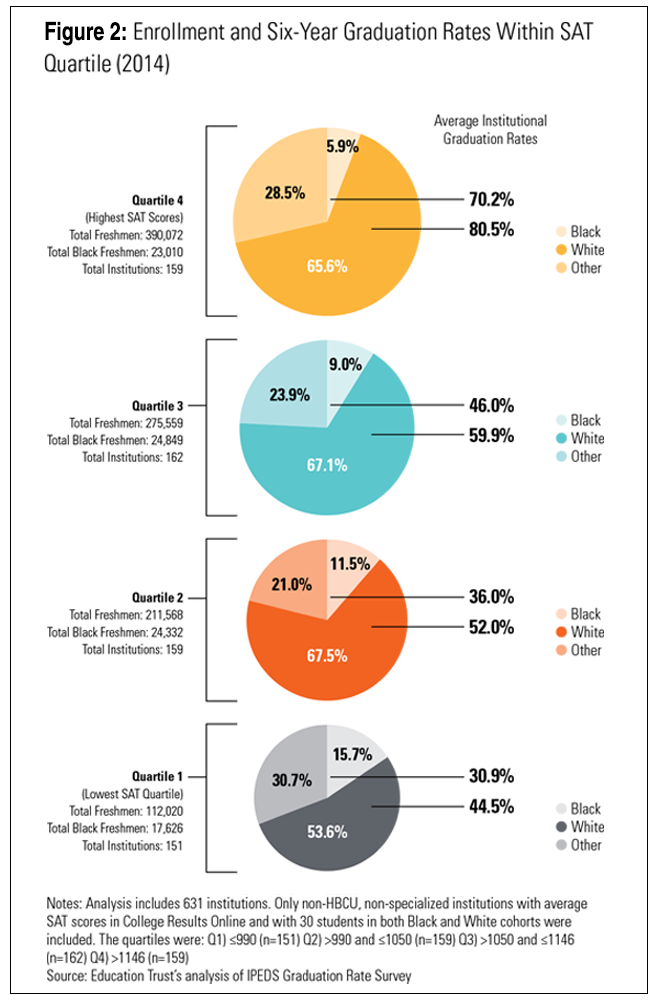 Unless otherwise cited, all graphics and data in this article are included with the permission of the Education Trust from their report, “A Look at Black Student Success: Identifying Top- and Bottom-Performing Institutions.”

On the Road with AAC&U

AAC&U News is written and edited by Ben Dedman. If you have questions or comments about the newsletter's contents, please e-mail dedman@aacu.org.